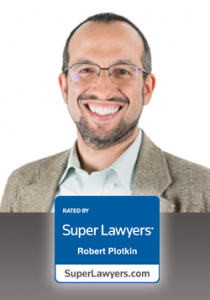 Leading technology companies and law firms worldwide turn to him to obtain patent protection in the U.S. for cutting-edge software in fields such as artificial intelligence (AI), quantum computing, autonomous vehicles, and speech recognition.  He has continued to consistently obtain software patents for clients even after the Alice Supreme Court decision stopped many high-tech companies and patent law firms from even attempting to obtain software patents.

He uses his decades of legal and engineering experience to maximize the value of his clients’ patent portfolios – allowing them to realize the largest return on investment even in the post-Alice world. His clients have profitably sold and licensed the software patents he has obtained for them to major corporations worldwide.  Mr. Plotkin’s clients benefit from patents that have been crafted to have maximum value for sale (e.g., as part of an acquisition or merger), licensing, and defense against patent lawsuits by competitors.  His small- and medium-sized corporate clients have found that, with a relatively small investment in a defensive patent portfolio, they can avoid paying millions of dollars in legal fees to fight off larger competitors.

Mr. Plotkin is an MIT-educated computer scientist and engineer with a technical background matched by few, if any, other attorneys.  He has used his combination of technical knowledge and two decades of patent law expertise to develop a unique proprietary process for obtaining strong, broad, and defensible patents that maximizes the sale value of the patents and the clients that own them, increases the likelihood of success when the patents are enforced against competitors, and increases the strength of the patents against attacks by competitors.  Mr. Plotkin is also an innovator himself—he is a named inventor and owner of over 25 patents and patent applications.

In his two decades as a patent attorney specializing in software patents, Mr. Plotkin has obtained hundreds of patents for leading technology companies worldwide, including HP, Compuware, Tata Consultancy Services, and 3M.  His first law firm, Robert Plotkin, P.C., was recognized as a “Go-To Law Firm for Leading Technology Companies” by American Lawyer Media as a result of a survey of leading high-tech companies in the U.S.  While at Blueshift IP, he was named an IP Trailblazer by the National Law Journal, putting him in an elite group of IP attorneys nationwide.

Because of his legal successes and unique qualifications, other patent lawyers consult Mr. Plotkin to learn about how to obtain software patents post-Alice, while leading educational institutions come to Mr. Plotkin to train current and future lawyers. He has taught about software patents at organizations and events including the MCLE Annual Intellectual Property Law Conference, Boston University School of Law, the Practising Law Institute (PLI). He is also a contributor on software patents and patent strategy at the leading patent law blog IPWatchdog.

Recently, Robert was selected for inclusion in the 2021 Massachusetts Super Lawyers List as “Top Rated Intellectual Property” Attorneys published by Thomson Reuters. Each year, no more than five percent of the lawyers in the state are selected by the research team at Super Lawyers to receive this honor.

AI experienced a massive boom during the pandemic and continues to grow and shows no sign of slowing down. In fact, AI patents have had an average annual growth of…

Today, the proliferation of machine learning (ML) and artificial intelligence (AI) is significantly changing the business landscape. Businesses across all industries have been utilizing ML/AI applications in their day-to-day business…

Blueshift IP provides an overview of Section 101 of the US Patent Act and reassures that it is possible to obtain strong, broad, and defensible software patents in the US,…

Blueshift IP’s Robert Plotkin spoke with Law360 regarding Elon Musk’s comment about patents in the article “Musk’s Dim View Of Patents Ignores Reality For Most Cos.” The article discusses Musk’s statements…

As Use of Robotics Increases, AI Patents Become More Critical

Companies and their employees are under growing pressure to perform more effectively and efficiently. Increasingly, they are turning to artificial intelligence (AI) and robots to go beyond the limits of…

Intro to the Metaverse

Web 3.0: The Next Frontier In Our Online Journey

Contact Us
We use cookies on our website to give you the most relevant experience by remembering your preferences and repeat visits. By clicking “Accept”, you consent to the use of ALL the cookies.
ACCEPT